It’s All About Deer

Wild sheep are magnificent, bongo are amazing and elephants are awesome. But for 10 million American hunters, “big game” means deer. Exactly which deer depends a lot on where one calls home. In most of the country, deer means whitetail, but in the western Great Plains whitetails and mule deer coexist, and the mule deer is still king in the Rocky Mountain West. Coues whitetails have their own special almost cult-like following in the Southwest, likewise blacktails in the Pacific Northwest. 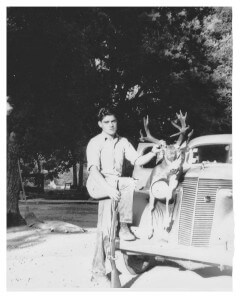 The oldest San Diego County trophy on display at San Diego Chapter’s “deer night” was taken by Robert E. Turner in 1944. A heavy-antlered 5×7, it field dressed a 146 pounds. That’s a big-racked and big-bodied deer for this area…but several larger bucks of all vintages were also on display.

Whatever brand of deer happens to live in a given area, it’s almost certain to be the most popular quarry among local hunters. Survey after survey has confirmed that the great majority of American hunters pursue their sport within reasonable proximity of their homes. On a percentage basis relatively few travel out of state to hunt, and even fewer travel out of the country. Many of us reading this publication are fortunate to travel to the farthest horizons in pursuit of our hunting dreams, so it’s all too easy to lose sight of the critical importance of both deer and the American deer hunter. The former, numbering more than 25 million in North America, comprises the largest big game population in the world. The latter, the deer hunters, are the largest group of single-minded sportsmen and women in the world. According to theSporting Goods Manufacturers Association, in 2011 “firearms and hunting equipment” comprised the largest gross sales in the world of all sporting goods, with 2.9 billion dollars in sales considerably exceeding golf, fishing, camping—and everything else. You can bet that a major share of those sales was to America’s deer hunters! 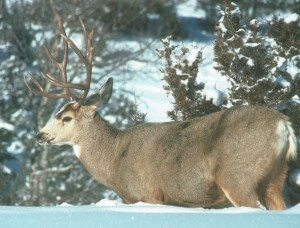 With numbers like that, one could even say that America’s deer hunters are the hope and salvation of our sport—and certainly they offer the largest pool from which SCI can swell our own numbers. TheSan Diego Chapter might have had some of that in mind when, on July 18, their monthly meeting was dedicated to a celebration of San Diego County deer hunting. Working with members, local hunters and taxidermists, they located and put on display a genuinely stunning collection of San Diego County bucks, some taken clear back in the 1940s and others just last season.

Honestly, I was amazed. I’ve lived mostly in California since I was first stationed at Camp Pendleton in 1975, and I’ve hunted the Golden State most years since then. California deer hunting is tough, and the deer herds have problems. There’s a lot of human development, including some of the world’s most intensive farming that leaves little room for habitat. Predators are another serious problem. When the mountain lion was protected 30 years ago, California probably had the largest population in the West. Lord knows how many there are now, but they are the leading cause of deer mortality. A well-intentioned and longstanding “two-point” antler restriction has created a strong “genetic spike” trait in many areas. 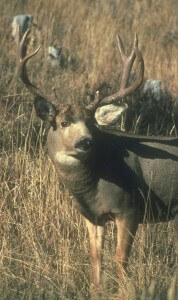 Put it all together and “trophy bucks,” whatever that means, are scarce and hard-won. But California also has a lot of extremely rugged country and some huge National Forests. The deer situation is also very interesting, with at least four distinct mule deer subspecies and broad overlap areas. The northeast corner, in the high Sierras and along the Nevada border, has Rocky Mountain mule deer. In the northwest the deer are Columbian blacktail, probably the state’s best trophy opportunity. In the southwest corner, below Los Angeles and on into Mexico’s Baja Peninsula, the deer are southern, or Baja blacktailed deer, typically smaller, darker, and stocky of build. This is probably the least known race of mule deer in the United States—unless you happen to live there. Exact boundaries are impossible to determine, but the rest of the state is California, or desert mule deer, smaller and paler than the Rocky Mountain variety.

When we hear “San Diego” most of us are probably thinking of the city, and few outsiders would consider the area hunting country. San Diego County is huge, encompassing serious mountains and fertile valleys. Toward the coast, the deer would be southern mule deer, running into California mule deer to the east. Neither race is large, and the herd has most of California’s management challenges. San Diego deer hunters know all this, and every year some of them, through hard hunting and maybe a wee bit of luck, find magnificent bucks. I’ll be honest; San Diego County is off my beat for deer hunting. Most of my experience is along the Central Coast, where the hunting is probably just as difficult and the deer are smaller. So I was truly stunned by the sight of several dozen really big California bucks all together, both racks and mounted heads. All were at least 20 inches wide, which is a big buck in California, and several were deer that would be taken without hesitation in any part of the Rockies. 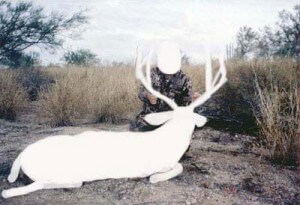 Is the Number 1 Baja Black-tailed deer already in your collection?

Despite everything you might hear or believe, make no mistake: There are still a lot of serious deer hunters in California, with our many California chapters representing just a small number of them. For the San Diego Chapter I think it was an extremely clever idea to bring some of these hunters out of the woodwork. It was the largest monthly meeting in quite some time, and a show of hands revealed several dozen non-members, deer hunters who came to display their own trophies and admire those taken by others.

Some came as guests and will become new members, but, and this is important, all gained a new appreciation for Safari Club International. We know we’re “first for hunters”—all hunters—and I love the name. But whether we truly appreciate the importance and the power of the American deer hunter, we also tend to forget that even today, nearly 40 years after our founding, that word “safari” remains intimidating to a fair number of the many hunters who pursue their sport close to home. At least until they get to know us…and after celebrating great bucks taken under some of North America’s most difficult conditions, I’m pretty sure we all parted as friends and fellow hunters.—Craig Boddington