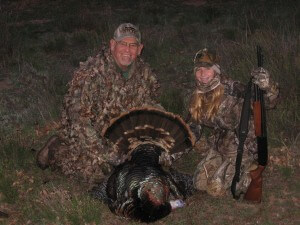 During the two-day junior spring wild turkey hunting season that precedes the general hunting season, 20 youths are drawn annually to participate in San Diego County’s Santa Ysabel Open Space Preserve Mentored Youth Wild Turkey Hunt. The San Diego Chapter of SCI is proud to join forces with the San Diego Chapter of the National Wild Turkey Federation in sponsoring this important annual youth hunting event. Here’s a report by Steve Turigliatto who mentored youths on both days of this 2014 hunt.

On Sunday, March 23, 2014 I had the pleasure to take an old friend (Mark Griffin’s daughter Remington) out after she was drawn for the Youth Turkey Hunt on the Santa Ysabel Open Space Preserve. I hunted the same spot as I did the previous day, knowing where they had roosted that day before. We snuck into the uphill side of the roost tree. As dawn started to break, there were no gobbles, unlike the previous day when 17 hens and 7 toms were talking from the sycamore trees. Finally we heard our 1st gobbles down the valley… then, a couple more from up the valley. We had set-up so she would have clear shooting lanes for birds coming from below us.

Just before fly down, I hear a gobble from behind and above us. I no sooner told her that I would watch the trail from above when here comes a big gobbler hot footing right for our DSD Jake decoy. On the dead run, he smashes into it, rolling it down the path, as he continues to pummel the decoy. Remington whispers,” two birds just flew down from the original roost trees… one hen and one tom”. At this, I told her we better take this bird. But there was a problem… she had a big rock blocking her uphill shooting lane and the tom would not leave the Jake decoy. So I told her I would lift her out of her turkey chair and above the sight of the rock, and when she could clearly see the bird, to shoot it. As I lifted her, the big tom is still in full strut and is facing the other way. As he turns around, she fires and rolls him over, but he regains his feet quickly. She doesn’t panic… pumps in another shell and drops him right there .Wow, Remington’s 1st gobbler, 21-10 lbs., 8 1/2 beard, and 1″ sharp spurs. This kind of hunt never gets old! 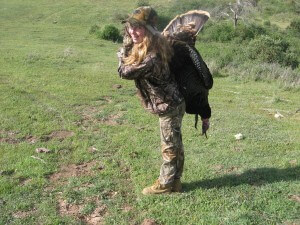