Return to Cabo – by Josh Zigman

After giving up fishing entirely for 14 years due to my obsession with hunting, I thought I might rediscover my passion for fishing. Before I started hunting, I did quite a bit of fishing. It started when I was a little boy when my dad started taking me trout fishing up at Lake Cuyamaca. As I grew older, my Dad took me deep sea fishing locally for yellow tail, albacore and whatever else was biting.  He knew I loved fishing and would make it a point to get me out on the water. We fished Ensenada, Laredo, Acapulco, Mulege, Mazatlán, Puerto Vallarta, San Quintin and even the Bahamas. Later, when I was a young man, I fished Costa Rica and Panama and even went on a couple 14 day long range trips out to the Revillagigego Islands. But of all the fishing destinations I’ve been to my favorite place to go and the place I’ve fished well over a dozen times was Cabo San Lucas. So it was a no brainer to decide to head back down to Cabo.

I put a group together that included my son Louie, Bud Coberly and Sergio Estrella with Muy Grande Outfitters. In preparation, I got all my reels and rods and tackle out of the garage, had the reels serviced, the line changed and my marlin lures re-rigged. We made reservations to fly out of T.J. on a direct flight to Cabo on Volaris Airlines for $175.00 per person (round trip!). The fishing gear cost a little extra to bring down. We landed Wednesday night, 8-31-16 and the first thing I noticed was how big Cabo had grown since 2002, the last time I was there. The coastline was almost all covered with condos, hotels and stores. 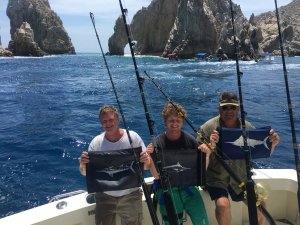 As before, it took about 45 minute to drive into town.  We stayed at the Tesoro hotel, which used to be the Plaza las Gloria Hotel, but now it was renamed and remodeled and much nicer than it used to be and room rates were even cheaper than I remember. We walked around the town first night and I discovered that a lot of the old places I liked to go were gone or changed but one thing that hadn’t changed, as we were going to find out was the fishing.

We chartered a 33 foot cruiser with a 2 man crew from a guy named Luiz Galvan that Sergio knew (Phantom Fishing —   www.Phantomfishingcabo.com). The boat came with live bait, box lunches and beer, soda and water. We were on the boat by 6:30 am each morning and typically came back around 3:00 in the afternoon. The weather was a little overcast and hot– what you would expect for early September. I brought my own gear but it probably wasn’t necessary. The boat had nice rods and Shimano Tiagra reels, but we didn’t need them because I had all that stuff and despite the 14 year layoff my gear was in better condition than theirs. The first two days we cruised out to the Pacific Ocean and caught a bunch of dorado and three striped marlins. 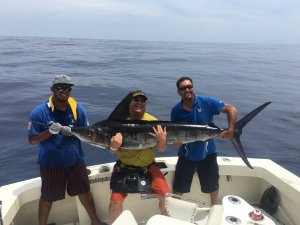 The dorado were hitting my spreader bars and my small or medium marlin lures (I used my old Zucker marlin lures and the boat captain wanted to buy them off me—which I politely refused).  The marlin were also hitting the lures but mainly crashed the Ballyhoo, which was set up in the middle position trailing the outrigger positions. They would hit the marlin lures on the outside first and if they didn’t get hooked then they would whack the ballyhoo or go for live bait thrown out on the bait stick.  In Cabo live bait is an absolute must-have to be successful and definitely worth the extra money. Louie caught his first marlin the first day and we all caught Dorado. We took a full Dorado to Solomon’s Landing, a famous landmark restaurant and bar off the doc at the main marina, and had them grille it and make us a load of Mahi-Mahi fish tacos. To say that those tacos were delicious would be a big understatement. 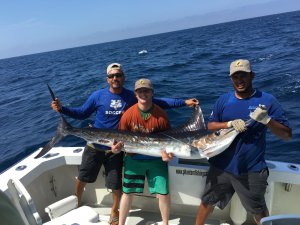 The second day we saw more action and were catching a lot more Dorado than the previous day and Louie and Sergio both caught a couple of big boys. It was getting after 1:00 pm and we started heading back when we got a double hit. First Sergio was on the rod fighting a Striped Marlin when another Striper hit a baited stick and Bud grabbed onto it. Both fish were jumping out of the water and it was marvelous to witness a double marlin fight. Unfortunately Bud’s Marlin broke off after a 30 minute fight but Sergio got his to the boat on my old Penn Senator with 40 pound test after a 45 minute fight. 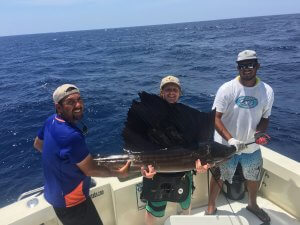 On the third day we changed plans and headed out to the Sea of Cortez in search of Blue Marlin. The mornings seemed to be quiet and then by 11:00 am the dinner bell seemed to go off and we started catching marlin. Both Bud and I hooked up on Blue Marlin in the 200 pound class. After Bud caught his Blue the time was closing in on 1:00 pm so we signaled to the captain to slow troll back to the marina. On the way back we hit a big strike and Sergio grabbed the hot rod and after an hour and ten minute fight boated a 350 pound Black Marlin.  Cabo is not immune to the anti-fishing pressures and has gone to a “catch and release” policy for all Marlin. For the most part, we released all but one bill fish—Sergio’s Black, and that’s because the fish died after losing his battle against Sergio. Evidently the fish didn’t get the memo about Cabo’s policy shift towards “catch and release” otherwise he would have swam right to the boat and given up. We brought this marlin back to the doc and to the captain and crew’s delight they all got a huge dividend of black marlin for their families and friends.  When I asked them why they wouldn’t take the fish to the weigh in scale they said, to my dismay that they don’t like to hang the fish up on the scales anymore because they are worried about the anti-fishing zealots protesting on the docs.  Personally I think they we just tired and didn’t want to hassle with it. Back 15 years ago we wouldn’t have hesitated to bring all our marlin back to the scales, but now I don’t have a problem with “catch and release”, which is not actually a law but simply good practice. 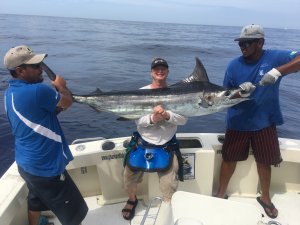 The last day Sergio had to go home so Bud, Louie and I had the boat to ourselves. We told the captain to head out to the same spot to try our luck on the Blue Marlin again. The morning started out quietly with no fish action but we were entertained by hundreds of playful porpoise racing beside us and making high flying acrobatic jumps. Then, just like the day before we got hit around 11:00. Louie was first up and brought in a nice sail fish. After a few minutes we got another strike and this time I brought in a bigger Blue Marlin which we estimated weighed around 250 pounds. We kept going and not much longer a reel started screaming off line and Bud caught a nice Striped Marlin. Unbelievably, no sooner than we put the rigs back into the water another sail fish hit the Ballyhoo and Louie was on his second sail fish of the day. With four billfish in the boat by 1:00, again it was time to head back. The rigs were still in the water but not much was happening. I thought our luck had run out as we could see the entrance to the marina. Then another boat crossed our stern and hooked up into something. We were trying to figure out what they had going when a fish hit our outrigger setup.  I grabbed the rod and brought in my first Striped Marlin in over 14 years.

All and all the billfish count was as follows: 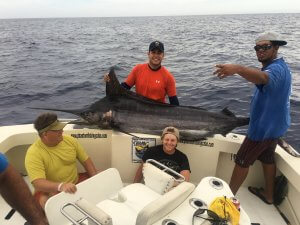 Sergio Estrella caught the biggest Marlin. We estimated it weighed between 325 and 350 pounds. Our blues were in the 200 pound class, stripers in the 150 to 200 pound class and Louie’s sail fish in the 100—125 pound class. We didn’t bother keeping track of the Dorado. No records were broken but we had an outstanding fishing trip and dollar for dollar I would still recommend Cabo over any place else.

One last note on how lucky were, we boarded our flight back to T.J. on Sunday night and made it home just before the arrival of Hurricane Newton which brought 75 mile an hour winds and dumped 12 inches of water in overnight on Monday.

Now—it’s back to hunting!!