This was our fourth trip with Tom and Katie Prijatel of Alaskan Wilderness Outfitting Co. — info@alaskawilderness.com to the Tsiu River in Alaska for silver salmon. The previous year was extremely tough 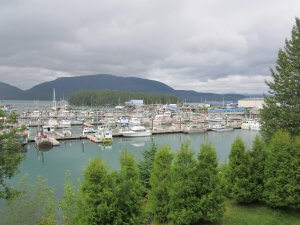 fishing because we went in mid-August and the rains hadn’t yet come to swell the river and the salmon were still schooling off shore. This year was to be much better though, because we were coming in mid-September and it had already rained a lot before we got there. I’m getting ahead of myself though, so let’s start at the beginning.

Mike and I booked this 4-day silver salmon fishing adventure at the 2016 SCI Convention in Las Vegas. We also booked our travel to go from San Diego, CA to Cordova, AK via Anchorage, AK as we’d done before, with an overnight at the Reluctant Fisherman Inn in Cordova, before taking the private plane ride to the Tsiu River and Tom and Katie’s fantastic lodge and cabins the following day. The Reluctant Fisherman Inn is located in a beautiful harbor in 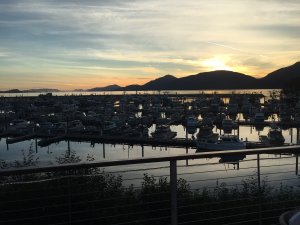 Prince Williams Sound and the view from the hotel, as well as from their terrific restaurant is pure eye candy. And yes, the quality of the food matched the view.

It had been raining on and off for the last month so we were pretty confident that we weren’t going to suffer as we did the previous year from a shortage of river water. 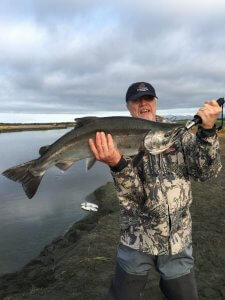 The first afternoon of fishing was accompanied with a light rain and confirmed that the water was high and that the fishing was good, with frequent strikes on our Blue Fox spinners and spoons. The fly fishing was equally good, with purple jigs being the salmon’s apparent preferred color choice.

It stormed all night on the first night and the wind and rain hadn’t let up by morning. As we loaded into the ATV carts for the ride from the lodge to the river we were being pummeled the entire time. Once we left the protection of the big pine trees around the lodge the wind became much worse and by the time we reached the dunes at the beach we were being simultaneously sand blasted and drenched with rain. When we finally reached the upper stretches of the river known as the Tiki Bar and unloaded ourselves and our gear from the ATV carts, we discovered that it was virtually impossible to standup because of the hurricane force wind and rain, so we sought shelter in the nearby alder bushes and waited for a break in the storm. 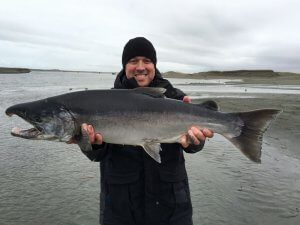 After an hour or so, the wind died down a bit and we were finally able to fish, as long as we kept the wind to our backs. The fish didn’t care one bit about the storm though and the schools of silvers kept coming and coming, finning as they came through the shallows and jumping as they took the lures into their mouths. We were landing (and releasing) 10-12 lbs. salmon on nearly every cast, with an occasional 15 lbs. fish and we even managed to land an 18 pounder!

Jim Conrad serves on the Board of Directors of the San Diego Chapter of Safari Club International as Chairman of the Communications Committee and Immediate Past President .