Today was Montana’s 2016 waterfowl opener.  I setup about a 100 yards from the main highway that cuts through the wildlife area. Ronnie, my hunting buddy decided that it was too close to the road, so yesterday he put out his decoys out on a point of tulies out in the main pond.

As daybreak started and about five minutes before sunrise I had two mallards, two gadwalls, and a green-wing come into the decoys. At shoot time (6:58 am), the first shots went off. My birds had swum out and were gone with the first volleys.

I heard a shot to my left (I assumed it was Ronnie), but no dog going to get the bird, which was odd. As it gets lighter, I see three guys in the tulies about 100 yards from me. I can see Ronnie’s spinner, but now there’s three dozen decoys instead of a Ron’s 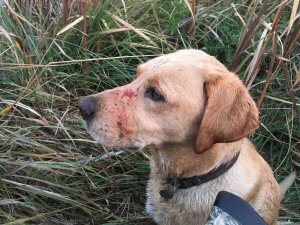 one dozen.  After a couple of more shots, I realize these guys are sitting in his decoys! I finally talk to Ron and he says they didn’t know any better and they were nice kids. They thought someone had just left some decoys out, so they put theirs right in among his. They finally picked up and Ron was able to get a couple of birds, including his first blue-winger.

Early on I had three single ducks come in, two green-wings, and a gaddy and I bagged all three. Then at about 10:00 am it really died and we decided to go get breakfast in the town of Fairfield. When I get back in the blind at about noon, I have a single gaddy come right in…#4. Thirty minutes later another gaddy comes into the decoys…#5. 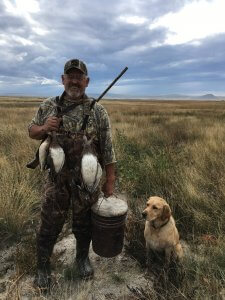 Twenty minutes go by and a single blue-wing (assuming they’re blue-wing this far north) jets in…#6. Ronnie decided that he’s had enough and starts back to the truck. Just about the time he gets to the truck, another gaddy commits suicide…#7.

Canada is a fabulous place and every waterfowler should try to go there someday. 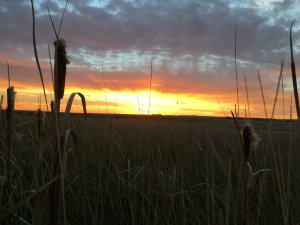 However, toughing it out, sitting, waiting, and the solitude of a marsh has a special place in my duck hunting life. This was one of those days in Big Sky Country.