As many of you know, our local SCI chapter has been instrumental in conservation efforts aimed at reintroducing the Pronghorn to Southern California. As a result, the California Department of Fish and Wildlife (CDFW) awarded their 2016 fundraiser tag to help finance their efforts to our chapter and it was auctioned off at the annual convention this past February. I am writing this story because I happen to be the lucky recipient. Now this tag is a very special one indeed. With it, the holder had a much longer season with little restrictions on location or method of harvest. Specifically, the holder of this tag could hunt any zone in the state and use any legal harvest method. The season ran 51 consecutive days, starting July 30 through October 18 with no split in the season! And if that was not enough enticement, our chapter allowed the winning bidder to choose any firearm from the silent auction table! For a gun nut like myself, that sealed the deal and I chose the Kimber Mountain Ascent rifle in 270 WSM.

After the initial excitement settled a bit and I realized what a tremendous opportunity this was, I was contacted by the CDFW Elk and Antelope coordinator Joe Hobbs.  Mr Hobbs supplied me with the tag, a hunting license, zone maps and mounds of statistical harvest results from previous antelope hunts. I must say, Mr. Hobbs and everyone I contacted at the CDFW were extremely helpful and pleasant to deal with. After much consideration, I decided upon hunting in the Susanville area. Susanville is the County seat of Lassen County and is located in the northeast corner of the state. At around 4200’ elevation, the area terrain consists of a mixture of flat plains with knee high grass and sage brush to rolling hills and juniper covered mountains. This semiarid desert area gets about 12 inches of rain and 14 inches of snow per year. There are mule deer in the streets and yards of downtown Susanville and I saw many travelling to and from my temporary residence at the Diamond Mountain Casino and Lodge every morning and night. The lodging was superb and reasonably priced and it felt more like Idaho than California due to the number of hunters and gun toting, law abiding citizens. You can learn a lot about the culture of an area by reading bumper stickers! Definitely not So Cal… If you are traveling through this area, I recommend stopping at the Lassen Ale Works located in the historic Pioneer building. Excellent food and drink in a great setting.

Jim Conrad, the Public Relations Chair of our SCI chapter, turned me on to a local guide, Jeff Cagle, of Honey Lake Firearms and Guide Service in the Susanville area.  I contacted Jeff, a former fire fighter from Southern California, and lined up the hunting dates. Jeff has been guiding successfully in the area for many years and has access to thousands of acres of private land leases and knowledge of public land locations of the Lassen County area in general. His attention to detail and level of service are incredible and I will definitely hunt with him again. I arrived the afternoon of July 29th and met with Jeff to go over some last-minute details and plans. The next morning Jeff picked me up and we began the first of several days that involved glassing in 90+ degree heat. We saw many “shooter” antelope, but we were looking for the big one and were in no hurry. One antelope in particular dubbed the “Ravendale Goat” gave us the slip more than once. We could get glass on him from a distance but any effort to close the distance proved unsuccessful as he would somehow manage to vanish in the sage. We spent several days glassing herds of goats including lots of time on quads and stalking through beautiful terrain. It takes a fair amount of effort to get close to animals that live in knee high sage and can run up to 50 miles per hour. We hunted the Grasshopper area, Honey Lake, Ravendale and a few others and saw hundreds of antelope, but as mentioned, we were looking for something exceptional. After 4 days of hunting and not seeing that exceptional animal, we had decided that the next day, Wed Aug 03, was to be my last day hunting. The plan was, if I were unsuccessful the next day, to return around September 1 at the height of the rut and give it another try. This would also be during the CDFW split season where once again, I would be the only person hunting legally in the state.

Wednesday, August 03, dawned cool and sunny, and as Jeff and I trailered our quads out to the Grasshopper area, we talked about what we might encounter upon my return in a few weeks. We had hunted this area previously and fully expected to see the same antelope and as mentioned, we were already preparing for my return. The Grasshopper area is a massive valley and dry lake bed that sits at around 5300’ elevation and consists of golden, knee high grass spotted with clumps of sage. Views are spectacular and the region is loaded with antelope, quail and mule deer with juniper trees bordering the dry lake and covering the hillsides. Ancient natural blinds made of rock, which Native Americans undoubtedly used for concealment in hunting these very same animals, can be found around the perimeter of the dry lake. We mounted the quads around 7:30am and began to make our way slowly around the edge of the lake bed and immediately began to see antelope. After about 5 minutes I noticed that Jeff, who was riding ahead of me, had stopped and was motioning for me to get off the quad and come over. There were 2 large antelopes browsing approximately 850 yards ahead and one of them appeared exceptional. Since we knew it would be nearly impossible to get within shooting range, we quietly dismounted the quads, hunkered down and waited. After about an hour the goat made his way westerly around a bend and disappeared behind a hill, so Jeff and I hiked around the back side of the hill and up to the top. As we peered over the crest, we were pleasantly surprised to find the goat feeding in the valley below, and we ranged him at 375 yards. This was to be an extreme downhill shot, and as my first shot sailed over his back and kicked up dust, I learned something about correcting for such an angle. I can consistently hit steel at that distance but I had not practiced shooting at such an extreme downhill angle. The crack 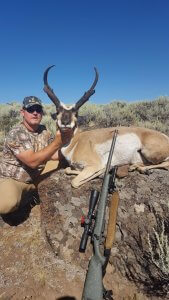 of my first shot caused him to run approximately 50 yds to the left where he immediately stopped with all senses on high alert. His head was on a swivel for sure but we were well concealed high in the rocks.  I took an extra second to compensate for the angle and my second shot from the 270 WSM found its mark. He immediately bolted forward, ran approximately 25 yards and piled up. The 140gr Accubond bullet pierced the heart and vitals and was recovered against the hide on the far side. The goat was initially rough scored at around 91, which caused a fair amount of excitement since this would have qualified for a new state record, but after waiting the mandatory 60 day drying period and enlisting the services of a Master Scorer, the final tally was 84-2/8, tying him for seventh on the state record book.

As is usually the case, the kill was anti-climatic and what I will remember most will be the good times in Susanville, the stunning scenery and the fellowship shared between Jeff and I. The area is beautiful with good food and beer and the people are friendly. This hunt was one of the most enjoyable I have ever experienced and I will be returning to hunt duck and geese with Jeff this January. Now if I can only manage to get my hands on a similar tag for mule deer! Jeff can be reached at (530)310-3900 or at hlfirearms@frontiernet.net. His website is  www.honeylakefirearms.com