…The Right Place At The Right Time – By Bud Green

I believe it’s the uniqueness of the autumn morning light at dawn which holds my youthful expectations and excitement. Since the age of twelve this hope of adventure has never failed to reoccur in me. That was 58 years ago when my father took me on my first deer hunt. This October morning was no exception. I was calm on the outside and anxious on the inside just like back then. This ageless emotion could be called the ‘butterflies’ but at my age it’s more like moths flying around in my stomach.

I was running the proper shooting sequence thought my mind over and over again as I held up my end of the conversations with my son James and my new friend Donnie Moffat of Coyote Outfitters. We were riding in his 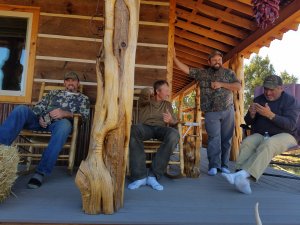 pickup truck bound for a spot Donnie believed would be the best place to be opening morning in our unit west of Durango. He mentioned, “It could be the right place today, but you just never know ahead of time.”  I had a mule deer tag and was determined to fill it. ‘Target acquired; distance determined; point of aim…’ I continued to rehearse the shooting order until we reached the place where Donnie parked his Ford.

I routinely practice rifle shooting before every hunting season and scheduled trip. While at the range I run the drill as 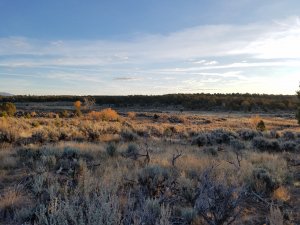 if the target is not made of paper but was a deer or elk or kudu. “Perfect practice” results in correct muscle memory and builds in me an assurance that gives  confidence-‘I can do this’- when I am in the field hunting. I still get nervous and have doubts if I can full off the shot. So, I shoot lots rounds using a bench rest, shooting sticks and a bipod. I practice at 100, 200 and 300 yards and usually zero at 200 yards. I zero at that distance because it seems the last few years the distance between me and the game is growing further away. I want to be able and ready for a kill shoot beyond 150 yards. My scopes do not have adjustable distance turrets. So when I need to hold the point of aim higher or lower I know the spot. I have done it at the range many times successfully and the certitude developed by this method comes along with me on the hunt. It’s not perennial and needs to be renewed several times a year.

Okay-Back to the hunt…That morning the half moon was still in the indigo colored sky. Visible and glowing the silver white light exposed the terrain as the truck came to a stop. Sun rise was not far off and soon the sky line would be painted that Colorado golden apricot hue.

We all quietly got out of the pickup. Donnie, James and I put on our back packs; James and I shoulder our rifles, and made sure we had our binoculars. There was not a lot of talking inside or outside the truck now. We knew what to do and how to do it. Donnie led the way along a trail which would bring us eventually to a sage park. A meadow of low sage plants with a scattering of yellow willows. It was maybe a sixty acre clearing. A water hole was to the west and the ground sloped gently down in that direction. To the east the low sage brush flat rose into a forest of greenish cedar, junipers and pinion pines. The whole park was surrounded by this forest of four to twenty foot high trees which densely populated the landscape except for this clearing. We were walking single file, not making any noise I could hear. I was hoping the deer could not hear us too. I followed Donnie. James, who had an elk tag, hung back a pace or two. When we reached the southern edge of the sage flat Donnie motioned for him and me to head west and for James to stay in the brush line where the trail ended at the park. Donnie and I slowly and carefully tip toed westward. We didn’t go far. We were centered, half the field to the east and half to the west. We were facing north and the sun was rising to our right. There was no detectable breeze or wind but I could smell the sweet scent of sage and the damp earth. A murder (squadron) of crows glided over head.  Some believe this is a bad omen.

We glassed the area. Nothing was moving. No deer in sight yet. The early morning sun light brightened the whole area. The temperature was about 40 degrees and warming. I looked at Donnie; he shook his head back and forth. Okay, we wait.

We were seated on the ground between some scrub oak along the southern border of the park. I was dressed like a Halloween pumpkin- orange hat and vest. Colorado has its hunter rules. Dress to be seen.

There was a round in the chamber of my Winchester model 70 300 WSM, with the safety on. The chambered cartridge was the able work of Mr. Charley Cook. The bullet was a Barnes TSX 168 grain. Charley is a perfectionist and craftsman at reloading. To pass the time I practiced with the shooting sticks. I slowly placed the rifle in the V-junction of the 2 sticks. I was holding on a dark spot in the earthen dam at the western water hole as if it was a big buck. It was about 300 yards away.  After practicing this routine a few times I laid the sticks aside. Just then 2 bucks walked into eastern end of the clearing. My heart beat seemed to go from 68 to 108 beats a minute in a flash second. Both Donnie and I had our binoculars on them. They were browsing; looking about and slowly moving toward us. Donnie lowered his binoculars, and turned towards me and whispered “they’re okay, but not the one we want.” He said this so softly I had to read his lips to understand. Okay, we wait.

But, these bucks keep coming. The younger one in the front, the older more mature one was following. Time passed and now the young one is 30 yards for us.  The older smart one held back a ways and looking right at me. Maybe he thinks I’m a real pumpkin. “Trick or treat,” I said to myself. We could tell the mature buck was alert, suspicious, nervous and ready to bolt. But he didn’t. He just focused on us sniffing the air and moving his big tall ears. I stared back at him and did not move anything but my eyes. He was a nice shooter buck. By now, the young one was right in front of us…and suddenly he realizes his older buddy had stop and now he’s jittery. The younger buck looked at us…he’s wondering something like ‘what or who are you?’ and ‘is it time to bail out?’ In three brief seconds both bucks walked northwest across the flat into the trees and out of sight. As they walked they look back over their shoulders in our direction several times. We had been made.

About the time my heart rate returned to normal I looked to my right and saw a monster buck stride into the east end. Donnie saw him at the same moment. He turned to me, and with a big grin on his face whispered “that’s him, 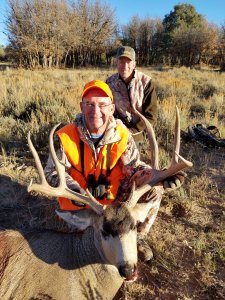 that’s ‘Fabio,’ that’s the one we want.” Fabio was the nick name Donnie had given this buck because he showed up in trail camera photographs-staring into the camera lens.

Donnie put his range finder on him and said “250.” I asked him if we could move closer. He said softly, right in my ear, “not a chance he’s at 263 …moving away, stop fidgeting, take off that orange hat and shot him…now.” I did exactly as I was told. All the practice at the range 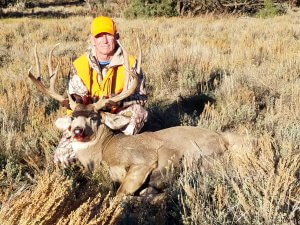 took over and I focused on the target and still do not remember the conscious act of pulling the trigger. My tag was filled.

Coyote Outfitter is Donnie’s business. He is a professional licensed outfitter specializing in trophy mule deer, elk, bear and mountain lion in the Durango area. Donnie is an expert at finding big game. He’s fun to hang out with; skillful; humorous and he can tell a good story. He’s vested in your success and enjoyment and puts every effort into your hunt. The accommodations at his cabin are first rate. He knows the Durango area because it’s his home town and he grew up in the community. Except for some years on the rodeo circuit, and guiding in Alaska and Canada, Durango is his stomping grounds. If you want a big Colorado mule deer or elk or lion go hunt with Donnie Moffat.

Have I mentioned the food prepared and served at Donnie’s hunting cabin? Holy cow was it fantastic. Amie and Shawna were the cooks. Their bill of fare is what I call Colorado country cuisine.  They are a dynamic duo in the kitchen. Their culinary movements in that small space with a 1950’s retro-feel appeared to be choreographed to the music from Fantasia. Walt Disney would be proud. The breakfast they served us when we returned each morning from hunting was prepared to perfection with a smile and hot coffee. One evening they fixed chicken fried chicken with velvety mashed potatoes and cream gravy, along with oven fresh, flaky, buttery dinner rolls. Desert was apple pie baked that afternoon and serve with hand churned vanilla ice cream. Lord have mercy, that was superb food. I ate too much and did not care one bit. 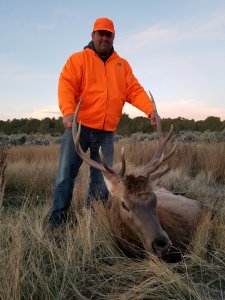 A few days after Fabio the big buck was taken James took his first bull elk with Donnie at his side. They found elk east of Durango as the sun was setting on that cool October evening. They told me later that elk started congregating in front of them and that they had come from all directions. Bulls were bugling, cows were meowing and spikes were mixed in with the legal bulls. It was an utter chaotic ballet of elk wandering in and out of view. James and Donnie were literally covered up with elk. James told me later that elk walked within forty yards of them and they never knew Donnie and he were sitting there watching these animals dance a western two step. How fun was that? How spectacular was this once in a life time event? Well, just ask Donnie or James the next time you see them. They have a story that needs to be told and you need to hear it firsthand from them.