A Hunt in Paso Robles – by Josh Zigman

Back in 1995 I shot my first game animal, a nice boar up in Paso Robles. After that first pig I was forever addicted to hunting and went back to Paso to hunt pigs and black tail deer several times from 1995 through 2000.  When I started hunting different species Paso Robles got left in the rear view mirror and I stopped going up there and lost contact with the guy I used to hunt with.  Recently some of my hunting buddies started asking me where a good place to hunt pigs would be. I knew Paso Robles was a great place but I had no idea who to hunt with up there anymore.

At the last July SCI dinner meeting at the Bali Hai I asked our guest speaker, Craig Boddington, who lives up there, for suggestions. He recommended Chad Wiebe, with Oak Stone Outfitter. I called Chad and set up a December hunt date. I wanted to hunt with him and check out his operation before I gave the “thumbs up go ahead” to 10 guys that were bugging me to find a good outfitter there.

Last Friday morning, 12-16-16,  I left San Diego at 3:00am in the pouring rain to pick up Ben Allen (SDSCI member), who works for me as a Superintendent in charge of running a job we are building up in El Monte. I hit El Monte at 5:00 am and we drove straight up the 5 freeway to Paso and arrived about 8:30 am. The outfitter put us up at a guest house in Templeton, which is minutes from Paso Robles.

We dressed in our hunting attire and headed out to the Sky Rose Ranch, a 22,000 acre ranch in San Miguel, right outside of Paso Robles and very close to where I used to hunt back in the late 1990’s.

Our guide’s name was Tyson. Ben and I were hunting together as it was a 2 x 1 hunt. By the time we got to Paso the rain had stopped but the roads were too muddy to hunt in his pickup truck. He fired up his Polaris and away we went.  We spent most of the day glassing but didn’t see much which was no surprise as I knew from my past hunting experiences that Paso Pigs normally only come out at the evening and the early morning. At about 4:30pm we got on the Polaris and started driving the dirt roads looking for pigs. It didn’t take long and we bumped into a large group. A big boar took off running and Tyson floored the Polaris to cut him off. When we got in front of the boar he skid to a halt and I jumped out and killed him. Not wasting any time we jumped back on the Polaris and made a run to try and find the group of sows that split off from the boar. When I say “ we made a run” I mean Tyson was doing 40 to 50 miles an hour on the wet dirt roads skidding around curves and flying up the hills. The wheels were slinging mud everywhere and the wind blew our hats off our heads.  We spotted the sows and I jumped out of the Polaris and ran down the hill with Tyson to get a good shot. The pigs were running for their lives but I was able to get a shot off at the last pig in the line. I hit her and spun her around but she wasn’t quite dead yet and kept running. We had to hurry and run crossways on the hillside to catch up with her. Fortunately the first shot began to take its toll on her and she slowed down. We closed the gap enough to get another bite at the proverbial apple. I plugged her again and took her just as daylight was disappearing. 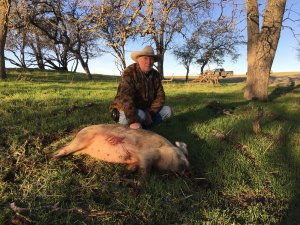 The next morning we were back out at 5:00 am.  This time Chad met up with us. I hopped into Chad’s pickup truck and Ben went in Tyson’s pickup. We drove up to two separate ridges and glassed for a little bit when we spotted a group of pigs. Chad radioed to Tyson and the chase was on. Ben got to the pigs first and shot one boar and a couple sows and l wound up killing another sow. The hunt was over just like that by 8:30 am! We took all the pigs back to Chad’s house took pictures there with the pigs I killed the night before. After the photo shoot we loaded up the pigs and headed back to the skinning shed. We wound up putting four sows and my big boar into our coolers and took off for home by 1:00 Saturday afternoon. This was an awesome hunt and I would highly recommend Chad if you are interested in doing a California pig hunt. For more information please look him up on his web site or call him direct.