I’d booked five separate deer hunts for the 2016 season, not intentionally, but because I managed to get drawn for both Kansas and Iowa plus I’d already purchased three deer hunts (Whitetail deer in Saskatchewan, Mule and Whitetail deer in Alberta, and Mule deer in Sonora, MX). Three deer hunts in any one season is about all of the sitting in freezing deer blinds that my old bones handle. At the time of this writing, I’ve taken a small 10-point buck in Saskatchewan (picture below) and passed on the only semi-decent Mule deer that saw in Alberta and I also missed a running Whitetail buck in Alberta.

My next hunt was scheduled for eastern Kansas with K&K Outfitters https://duckandbuck.com/. I’d hunted with this outfitter previously and I knew that they had some very respectable Whitetails and I was really looking to find a quality trophy. The weather was much warmer than what I had recently endured in Canada and I was concerned that the deer wouldn’t be moving much during the daylight hours. My first two days on the stand confirmed my fears and I only saw a few does and small bucks and they were only seen in the pre-dawn and post-sunset time periods. Rain was forecast for the fourth day so I really wanted to get things done on my third day of hunting, since I failed to bring any rain gear, thinking that snow was a far more likely scenario than rain.

I drew a really good tower blind for the morning of the third day and my guide dropped me off at a fence line before sunrise with instructions on how to locate my blind about 300 yards ahead. I found my blind, got settled inside and began taking laser ranges of tree lines and any other landmarks that I could make out in the semi-darkness. I noticed some motion almost directly below my blind and so I peeked out and saw what at first appeared to be a very nice buck with five high tines on one side. Unfortunately, that was all that he had since his other antler was completely missing… a half-rack buck. It was fun to watch him move out into the CRP field ahead, feeding leisurely. He eventually moved and disappeared into the trees to the right of the CRP.

I checked my watch to be sure that it was legal shooting time and settled in for the morning. After about half an hour had passed I saw motion in the tree line almost exactly where that mutant buck had last been seen so I assumed that it was him again. I raised my 8 x 42’s Leica’s to have a closer look and my jaw dropped, as I could see a really nice buck with a full rack… but he was still in the trees and facing directly away from me. I decided that any further glassing would now be done through my rifle scope, since the window of opportunity would undoubtedly be short. As I found him in my scope and raised the power until he nearly completely filled my field of view, he stepped to his left and offered me the shoulder shot that I was looking for. I squeezed the 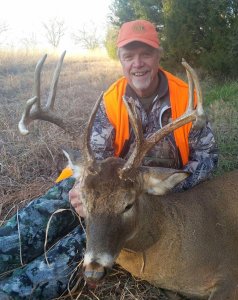 trigger; the 270 WIN found its mark and he darted into the trees, but clearly wounded. I climbed down from my stand and walked to where I had last seen him as he went into the woods and found a very clear blood trail. It didn’t take me long to find him about 30 yards into the woods. I field scored him at 145 SCI… a very respectable trophy Whitetail.