Our San Diego SCI Chapter is continuing to make progress on our Pronghorn Re-Introduction Project, whose goal is to re-introduce Pronghorn Antelope into their native habitat in Southern California.  In November, we had a very productive meeting with several of the project participants at the Living Desert Zoo in Palm Desert.  By the way, if you have never visited their zoo and gardens, it is well worth the effort.  They have beautiful grounds with a variety of desert animals, including a small herd of Peninsular Pronghorns. 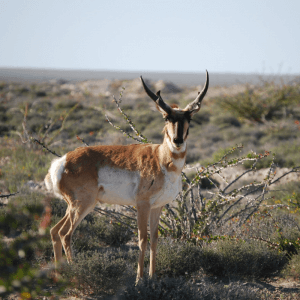 Progress was made on several fronts.  First the U. S. Fish and Wildlife Service has directed their staff to begin preparing the documentation in preparation for the release of Pronghorn into South East California.  Their estimate is that it may take a year to produce the documentation.  We are scheduling a meeting with USFWS staff for January to explore ways to speed up this process.  To that end, Bob Smith of San Diego SCI has reviewed the Population Viability Analysis (PVA) conducted by Arizona to determine its applicability to our release effort.  He has also obtained the software used to conduct a PVA and has been able to duplicate the results from the Arizona analysis.  He will meet with Arizona Game and Fish staff in late January to discuss their results, recent data collected on their Sonoran Pronghorn populations, and recommendations for conducting our analyses.  Meanwhile, Kevin Clark of San Diego Natural History Museum is exploring options for conducting an Environmental Viability Analysis (EVA) based on work done by their museum for desert tortoises in the same area where we are planning our Sonoran Pronghorn release.

Both the PVA and EVA analyses are important inputs to the USFWS documentation.  The former estimates how rapidly the re-introduced population is expected to grow, and the latter estimates the carrying capacity of the habitat (how many animals the proposed release site can support).  If we can provide these inputs to USFWS, it should help shorten the time required to produce their documents.

We were impressed with the enthusiasm of the Living Desert Zoo staff for their project.  Although it is too early for formal commitments, they are excited about our Peninsular Pronghorn re-introduction efforts; they have excellent veterinary facilities and staff and they even showed us a site where they could establish a pre-release breeding pen.

We are entering the phase of the project where we will need to fund actual facilities such as water sources, breeding pens and pens for the pronghorn to acclimate just prior to release.  Please consider making a tax-deductible donation to help keep this project moving forward toward our goal of a first release in 2019.

Our San Diego SCI has made donating easy.  Just go to our web site: www.sandiegosci.org