Home Conservation Save the giraffes — with private property rights

Save the giraffes — with private property rights

Tigers, polar bears, elephants, rhinoceruses, gorillas, giraffes and other animals face serious threats to their existence, but too often animal welfare activists look to government for the same failed solutions. However, more and more scientists and conservationists are starting to look at what some might consider a surprising answer: private property and free markets.

Many conservationists tend to harbor more leftist political ideologies, so they are wont to see capitalists as greedy exploiters of resources. But this ignores the fact that the capitalist has a much stronger incentive to preserve the resources he or she controls, whether those products are food, clothing or wildlife — no product, no profit.

Government control over resources through bans on trade and large “preserves” of public land, by contrast, tend to be counterproductive. Attempts to save elephants and rhinoceroses through bans on the sale of ivory or rhino horns — or on poaching in general — do not work any better than the prohibition of alcohol or illicit drugs, and for the same reasons: They merely create black markets and higher profits for those willing and able to flout the law.

As Bill Wirtz noted in a November column for the Foundation for Economic Education, “Every time there is a major call for an outright ban on ivory products, prices skyrocket, which ends up incentivizing poachers to shoot more elephants.”

In a recent piece for Reason.com, John Stossel highlighted an innovative free-market attempt to solve the problem of the rhino horn trade. Entrepreneur Matt Markus co-founded a company, Pembient, to create 3D-printed fake rhino horns indistinguishable from real ones, and then flood the market, thereby driving prices down so low that the trade is no longer profitable to poachers.

“South Africa once tried something similar by legalizing rhino farming and the sale of horns within the country,” Stossel and ReasonTV producer Maxim Lott observed. “The rhino population quadrupled in just two decades. But in 2008, South Africa banned sales of rhino horn again.”

Another example of the contrasting results of the property rights/free market and government approaches was illustrated in the documentary “Walking with Giraffes,” which aired in May on Nat Geo Wild.

While much of the show focused on habitat encroachment, poaching and even climate change as reasons for the dramatic decline in giraffe populations in recent years, it also offered a ray of light with a brief discussion of the “controversial” practice of wildlife ranching — essentially, allowing people to set up ecotourist and game preserves on their private property.

“In the last century, the conversion of wildlife into wildlife ranching is the biggest success story, which a lot of people don’t like to acknowledge. … But it’s true,” said Jeremy Anderson, partner and co-founder of International Conservation Services, which provides wildlife conservation and ecotourism consulting services. “Wildlife ranching took off in southern Africa; it didn’t take off in Kenya. This is why we have these two contrasting stories with giraffes. The giraffes here [in South Africa] are still increasing.”

The differences are truly staggering. While reticulated giraffes have suffered an 80 percent loss in population just since 2000 — and other species and subspecies have experienced devastating losses as well — the number of giraffes in southern Africa has nearly doubled during the same period.

“The main reason is ownership,” Francois Deacon, wildlife management professor at the University of the Free State in South Africa, asserted.

Put simply, people take care of their own property, especially if it offers a profit opportunity. When government owns property like a nature preserve, no one really owns it, leading to a “tragedy of the commons” problem where people benefit from overconsuming or depleting resources without having to bear the costs.

So the exploitation is far greater when the land (and the wildlife that live on it) is in government control, and conservation is far greater when the land and animals are under private ownership. This is all the more reason why free-market economists, and others, should not cede the conservation issue to environmentalists seeking a government solution — for the welfare of humans and wildlife alike.

Adam B. Summers is a columnist with the Southern California News Group. 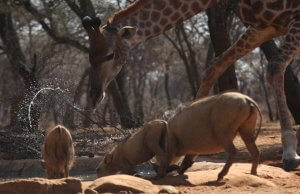 In this photo taken Tuesday, Aug. 18, 2015, warthogs and a giraffe drink at a watering hole at Melorani Safaris at Olifantsvallei, South Africa. In 1986 the landowner, Stewart Dorrington, turned his family cattle ranch, a three-hour drive north east of Johannesburg, into a wildlife reserve where he hosts about two-dozen bow and arrow hunters a year. (AP Photo/Denis Farrell)