The second week in October found Ingrid and I heading from Montana to Big River, Saskatchewan, for a high volume waterfowl hunt, located about three hours north of Saskatoon. By the time we arrived in camp, on the eve of our hunt, we had seen flocks of geese and ducks numbering in the tens of thousands along our route. 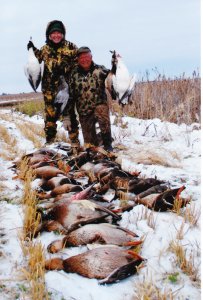 The hunt was booked with Vern Hyllestad of SaskCan Outfitters, for a four and one-half day adventure with the prospects of some serious fast and furious gunning.  The hunting headquarters was also the home of our guide and hosts, Vern and his wife Norma, where they raise cattle and grain crops.  In addition to the waterfowl hunting, a large part of their business is trophy whitetail deer hunting in the fall and black bear hunting in the spring.

The daily routine was for Vern to scout areas of feeding bird concentrations in the evenings and then take us to the field for morning shoots.  The early morning temperatures were in the high twenties and with five inches of show on the ground it meant we needed really warm gear to stay comfortable.   We basically limited on ducks everyday, some days very quickly, most of which were mallards. We also had good numbers of varying species of geese in the bag, which included Specks, Ross, Snows, Blues, Honkers and Lessers.  The shooting was fast and fun with plenty of opportunities.  Because of the early snow this year, a lot of the grain crops were not harvested but the grain on the ground surely held the birds in Big River! 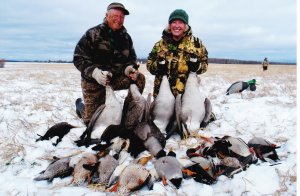 When we arrived there was snow on the ground and during our stay, encompassing five morning hunts, more was added.  One day we experienced almost horizontal snow blowing across the fields, but it held the birds down low and we enjoyed excellent gunning.  We saw no one else in the fields while hunting, which led to little pressure on the birds.

Based on Canada’s liberal waterfowl limits, I feel Saskachewan is still every bit as good a place to hunt ducks and geese, as the alternative of going all the way to South America.  We took our own guns and had no problem crossing in and out of the country at the border with our weapons.

We are seriously considering bringing several grand kids up for whitetail and black bear next year. All in all, a great get-a-way. – Wilt Williams