The barren winter forests that greeted my last trip to Romania for driven boar hunts were replaced with lush farmlands and the thick green foliage of June. This combination of rich crops and an abundance of cover led to plenty of trophy class roe deer.

Roe deer are to Europe what whitetail deer are to America. Roe deer inhabit most of continental Europe and Great Britain. Hunting season begins in May, with peak rut beginning at the end of July and running into August. This makes hunting roe deer a perfect side trip to a European vacation. During the rut, males can be called in from the forests into the open using doe and fawn sounds. For many hunters, this is the prime season.

The roe season can run well into December, but this is dependent upon local quotas and management goals set by individual hunting clubs. As with boar, this is entirely free range and you can cover a lot of territory glassing the forest edge looking for bucks worthy of a stalk. Another advantage of hunting this time of year was the opportunity to take a boar if a male presented himself during our hunt.

I chose June for my hunt, as I prefer the spot-and-stalk style of hunting. Once again, Horia Sandu of Unforgettable Hunting did an outstanding job from the moment I stepped off the airplane to the time I was delivered back to the terminal for my return trip. With home-cooked meals and an ample selection of local wine at the end of the day, you can easily leave Romania a few pounds heavier than when you arrived!

As with most deer hunting, dawn and dusk are prime times of deer movement. The first morning found us scanning openings on a hillside bordered by thick forest. During the summer, roe deer have a golden brown to almost red colored coat, which later darkens to grey in winter. You would think they would easily contrast with the deep green on the hillside and that spotting bucks would be easy, but the thick foliage and tall grass provided plenty of cover.

We soon spotted a couple of does and one buck that deserved a closer look. As we made our way down a hillside using a small ridge as cover, we came across fresh bear tracks and those of a red deer. It is worth mentioning that Romania is a sleeper when it comes to red deer, with stags that rival any found in northern Europe and Scotland.

The buck we spotted from the hilltop had moved into the forest by the time we made our way to a vantage point, but we saw more does and a small buck, which only served to build my confidence that we would be seeing larger bucks throughout the hunt. This proved to be prophetic, but as the saying goes, “be careful what you wish for,” as our stalks proved difficult with the added challenge of trying to avoid smaller deer without spooking the larger bucks we were after.

Roe deer emit a bark when alarmed, and my heart sank with each outburst. Soon we moved from the more open spaces to side hill stalks, with the hope of catching bucks feeding while maintaining cover from other watchful eyes. Horia spotted a nice buck bedded down. Unfortunately, I was not able to close the deal and find a good shooting position before the buck discovered our intentions were not in his best interest and fled into the forest.

The morning, though not successful, was exciting. Horia was confident that we would have many more opportunities in the evening. After an afternoon rest, we were back in the hills for the evening hunt and spotted a nice buck about a half-mile away.

We ducked, dodged and used all available cover to close the distance. Due to the sharp cuts and brush, we actually stalked to within 50 yards, but could not get a clear shot. The familiar bark came as the buck winded us, but he could not locate the source and made the mistake of gaining elevation and then stopping for a look back.

My first-ever roebuck was down, and I thanked him for this experience and the meals he would provide later. After we brought the roebuck back to the truck, Horia informed me that we still had plenty of daylight and this day’s hunt was not over.

We traveled to another area to glass, and my heart jumped as we spotted a large pig feeding at the forest’s edge. Unfortunately, it turned out to be a sow with piglets in tow, following their mom in the tall grass. We watched to sow for 20 minutes hoping that a male might show himself, but it was not to be. However, on our walk back, a roebuck even larger than the one I had taken earlier emerged from the forest. My limit of two bucks was filled within the space of two hours.

I could not be happier with the trip, and I highly recommend this hunt to anyone who is considering Europe as a destination to see old-world sites and seek new opportunities in the outdoors. 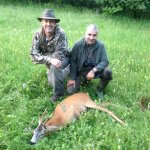