California Senate Bill 1175, originally named the “Iconic African Species Protection Act”, has been renamed the to hide under the guise of protecting people from zoonotic diseases and will be heard in the Senate Natural Resources and Water Committee on May 26th at 1:30PM.

The issue of zoonotic diseases is not new.  The transmission from animals to humans was happening way before COVID-19 showed up. In North America we have salmonella, E. coli, Hepatitis E, brucellosis, Toxoplasma, Trichinella, Lyme disease, plague, and rabies (which you can get from a stray puppy when it licks you)! Most of these first present like flu, and your doctor is not likely to test for them right away, which is when treatment is most effective.

Lawmakers are acting like the transmission of zoonotic diseases is something new and that they only come from wildlife trade. Rather than hearings, the focus should be on educating the public about what to look out for, how to prevent them ( not feeding racoons in their back yard or at the park) and making sure doctors include these illnesses in their investigations/diagnostics.

SB 1175 represents a misguided attempt to address a legitimate concern about diminished numbers of “iconic” African species. By banning the import of hunting trophies, the bill targets the countries where these species are healthiest.
Most elephants, lions, and black rhinos live in countries where they are hunted. These populations are stable or increasing—not declining.

The bill, if enacted, would be directly conflict with the Endangered Species Act (ESA), and therefore would be unlawful. Furthermore, under Section 8 of the ESA, the United States Fish and Wildlife is obligated to “encourage foreign counties to provide for the conservation of fish or wildlife.” Any state law that disincentivizes hunting and reduces the benefits for foreign conservation programs would directly conflict with that mandate.

Put simply, the bill is not based on facts. It will not save any species. To the contrary, elephants, lions, black rhinos, and other species will suffer if the incentives generated by regulated hunting are reduced.

The state of California currently faces a $54 billion budget deficit and this legislation would only add to that
Take Action: https://actnow.io/QQAduR4 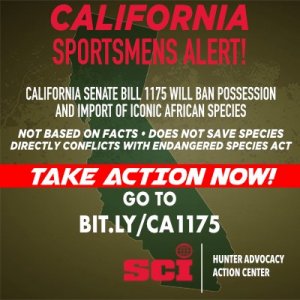 This message is only visible to admins.
Problem displaying Facebook posts.
Click to show error
Error: An access token is required to request this resource. Type: OAuthException


Join us for SDSCI Membership Night with Jason Rous