As a follow up to last year’s day at the range, my friend Ken Wolf and I spent a day in the field to learn more from Gerald Horee Jr. Gerald is a sniper instructor located at Camp Pendleton, who is also an avid hunter and has a passion to pass on his experience of advance shooting skills.

While Ken and I confirmed our rifles were zeroed, Gerald was busy setting up various steel targets throughout the valley and surrounding hillsides. The instruction began with shooting prone utilizing our hunting bipods. This sounds easy enough, but Gerald wants to create real-life scenarios to challenge the hunter. What if the bull or buck of a lifetime lay partially hidden by a tree limb, you are on a steep incline or the wind cannot seem to make up its mind what direction it is coming from? What would be a theme of all our drills this day was to range the target, set up, check the wind and make the shot. Too often, we as hunters are content to go to a range, confirm our rifles are shooting at 100 yards and call it good.
Our first prone scenario was actually two targets on different hillsides. These are 10-inch steel targets at unknown ranges. One target was partially hidden, and our task was to drop our gear, range, fire and switch to the next target within two minutes. This was to mimic the buck on a hillside just before he busts you and makes his way to the next county. The result of the first scenario was we failed miserably. Turns out executing the steps of range, set up, wind and shoot is quite difficult on uneven ground under the pressure of Gerald’s time limit. Young marines we are not!

Fortunately, Gerald is patient. After watching us fumble our way to a shooting position, Gerald provided different ways to establish stable shooting platforms on uneven ground and utilize our packs more efficiently. As with any sport, shooting is a process of learning fundamentals and putting in the time to become more proficient. As the day continued, our confidence grew, as the repetition of the practice became familiar and the sounds of our rounds hitting steel put smiles on our faces.
As the day heated up, the wind increased. We have all heard on minute-of-angle (MOA) when shooting and Gerald imparted what he refers to as minute-of-mph. This is the formula of both using a wind velocity meter or your own estimate of miles per hour and factoring this into your shooting. Once you get the hang of it, we were able to hit targets at different ranges while utilizing the correction for the wind.

We continued to work our way around the valley utilizing natural rests with a variety of shooting positions. This includes sitting, kneeling and standing along with using a tripod. Gerald demonstrated one of the most simple yet very effective method of using a tripod in conjunction with your sling. This method allows the shooter a rock steady rest while being able to adjust for elevation. Just another gem of information we learned.

At the end of the day, we not only came away much more confident shooters but also had an absolute great time doing so. I am already looking forward to the next day in the field.
If you would like to spend a great day at the range or in the field, Gerald can be reached at ghooee41@yahoo.com
– SDSCI Member, Leif Olsen 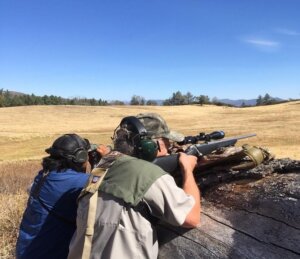