On January 26th, Senator Scott Wiener introduced a bill in the California state legislature that would have completely banned bear hunting statewide. Soon after, news of the bill began circulating on social media. The buzz about the issue spread like a digital wildfire throughout the hunting community. The ensuing days saw a wave of scientific and fact-based advocacy roll through the state, eventually washing away the legislative mud that Senator Wiener and the Humane Society of the United States were throwing at both hunters and the California Department of Fish & Wildlife. Less than a week after its introduction, the bill was withdrawn.

An open and unapologetic attempt to ban hunting for the sake of banning hunting has long been the goal of the HSUS. Never before has the organization and their legislative cronies been so brazen about that goal though. The intent behind the bill was clear – “It’s time we stop this inhumane practice once and for all.” That message was topped off with a thinly veiled justification falsely concocted in order to frame the legislation as guided by science and conservation support. That attempt was so shallow that even Senator Wiener and HSUS had to know it was ridiculous.

One of the primary concerns about the legislation was the precedent it would set for future lawmakers to ignore science-based management strategies developed by state fish & wildlife agencies in favor of anti-hunting groups’ emotional whims. It wound up setting a different precedent all together though – the precedent for the hunting community to respond to nefarious efforts like this with a unified, cohesive and digitalized advocacy push capable of making a tangible impact.

Safari Club was quickly able to send a letter of opposition directly to Senator Wiener, Governor Newsom, and several other lawmakers in California on January 28th, outlining the negative impacts of this legislation and stressing that there is no valid scientific wildlife management reason to stop the hunting of bears. This bill was simply an attack on hunting by those who disapprove of it. 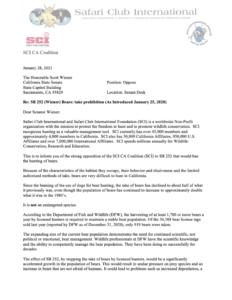 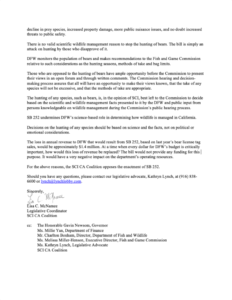 Safari Club wasn’t the only one ready for a fight though. Major media outlets like Outdoor Life and The Meateater ran feature-length articles raising the alarm about the bigger implications such a ban would have on the future of hunting at large. In the wake of the attempted ban, Bear Hunting Magazine also launched a collaborative movement emphasizing the importance of bear hunters “guarding the gate” to prevent well-funded and strategic anti-hunting efforts like this from morphing beyond just bears and coming for the rest of the hunting world. The article also included 7 conscientious things bear hunters can do to ensure bear hunting’s place in the modern world.

The strength of the Guard the Gate movement stems from collaboration on social media between a host of influential hunting and conservation groups. Video addresses from prominent social media accounts like Blood Origins and California SCI Member Lucas Paugh helped build on the digital flood of pushback against the bill. The scientific merits of Senator Wiener’s argument were also thoroughly called into question in an article from Townhall.

While this victory should be celebrated, hunters must remain vigilant and engaged in the government affairs process to ensure the same amount of support can be rallied the next time the anti-hunting movement strikes to erase your freedom to hunt. Safari Club is revolutionizing the way hunters communicate with elected officials. Text SCI to 73075 to find out more, and be sure to sign up for the SCI Hunter Advocacy Action Center to ensure that your voice is ready for the fight the next time the hunting community needs to turn up the volume on advocacy issues around the country.