On Feb. 6th, San Diego SCI Chapter members Les Osterberger and I sponsored a waterfowl hunt on the USF&W service mandated youth hunting weekend. This is a Nationwide opportunity for youth hunters 17 years and younger. We hosted 7 kids. Les is a member of “ Club Branches” in Imperial Valley where the hunt was conducted. A special thanks to owner Dennis Carson Jr. for having us.

It was a chilly morning as the camp started to stir around 4 am. At 5 am we all met at the gate and went over safety rules for the club and blind assignments.

I had in my blind Chris Roberts and his son Nicholas, age 10. This was his first duck hunt, as was the case with several other kids that day. After a few misses early he finally connected on a nice drake shoveler. Nick was very excited when I retrieved the bird for him. We discussed with dad a possible mount for his first duck. However, the bird everyone wants is the beautiful pintail, and the limit is one per day. Nick had several chances at this coveted bird but resulted at no shots or a couple of misses. He connected later a green wing teal for 2 ducks in the blind. About 11 am things slowed down, and hunters started heading back to the camp area for pictures. I felt sad we were not able to connect on the pintail. We left our decoys out and headed back to take pictures with the other hunters.

Every kid got at least 1 bird. The one young lady Alexa Brown got the most beautiful drake pintail of the day with her .410! We also had 3 hunters take limits. 29 total birds were harvested for a 4.14 bird average with high bird the cinnamon teal.

After photos I told Nick we had to go back out to get my decoys but bring your gun just in case. Nick stood guard outside the blind as Chris and I picked up the decoys. A few high stragglers were all we saw. Just after we bagged the decoys and cleared out the blind we looked up and a large flock of pintails started circling the club. “Nick get back here, is your gun still loaded?” “Yes” he said. We crouched down outside the blind and I told him to be still. The birds started working lower but were at the other end of the club. As they continued to circle, they started getting closer to the blind. On the next pass, 1 bird veered of the flock and headed our way. “Nick watch that bird”. Closer closer “take him”. Nick stood up and made a perfect shot and downed his first pintail. I told him “in waterfowl hunting you never give up”. 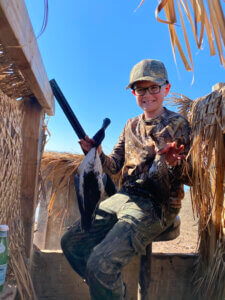