At SDSCI like to highlight hunting adventures that our members experience! Check out the latest adventure by member, Tom Krumenacker in Utah.

What to be featured? Send your information to lauren@reelcamogirl.com

Last year I booked a hunt with my friend Ravi for Rocky Mountain Elk with Courtney Richins of C & H Outfitters, in Hennifer, Utah.

I packed the truck and set out of San Diego at 4:30 am knowing it was going to be an 11 hour haul in my truck to Utah. Not fun–but not hard either once I got my head in the right mindset for a long stretch on the I-15–so it was not like it was going to be tricky.  I finally wheeled into Hennifer,  UT to find our guide waiting at an off ramp to the highway.  He introduced himself as “Bean”… “BEAN” I asked?  He told me it was a twist off of his last name and people have been calling him that since he was a kid. Bean was born and raised in town had all the answers to any local question you could come up with and knew the property, all 7000+ acres, like the back of his hand.   I made it up to the cabin and unloaded and discussed the next day hunt with Bean. The lodge was a very homey log cabin with individual rooms, big dining room and family room with a big fire place to warm and tell stories. We sat down to eat dinner when Marty the lead guide showed up and laid down the rules and told us that we would be breaking into two groups, one bull and one cow tag per team.

We were up at 5am, after some coffee and a bunch of mulling around over what gear to pack and wondering where we were going and what was to happen next, we were off on what was going to be my first big game hunt. I had hunted water fowl and pigs, but that was the extent of my hunting experiences to this point. After a short drive and about a mile hike through the dark Bean got us set up on a spot that he had seen elk moving through in the past. We made it to a spot on the forest line at the juncture of a few paths 10 to 20 yards wide that descended into each other. Bean started bugling and I couldn’t help but smile as I heard a bunch of Elk answer him back. He continued and they answered him again 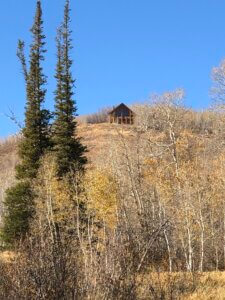 although we could hear the sounds getting further and further away.   Thinking that they had already passed us and weren’t coming back we moved on to scout some other trails. It was great hike; the mountains in UT are beautiful and as the sun came up you could see for miles into the distance as they rolled out before you.  But luck was with the elks so we headed back to the lodge for lunch.

Back in the truck at about 3 pm Bean took us to a spot where the animals normally pass through to feed and then bed down for the evening each night.  We were facing NE so the setting sun was behind us and the elk trail path was in in front of us.  My only concern was that the wind was coming from behind us and blowing right into the shooting area.  Bean assured me that this was not going to be an issue here, being new to all of this I went with it.  The far side of the path was a dense forest of aspens and ground cover– past my shooting window to the west were patches of trees. About 30 min into waiting Mike spotted three does and a fawn coming up the hill. I was sure that they knew we were there but they never spooked or ran. They continued up the path slowly and would stop to stare directly at us now and then.  They would stop to munch a little, look around turning their ears about, eat a little more and repeat that stare down lifting a front leg as if anticipating something. After about 30 minutes of this they moved on up the mountain. Then another group of does approached similarly but farther to the west. This time as they came up once again and stopped dead in their tracks looking at us and trying to figure out what to do. After about 20 minutes of stepping, stopping, looking around they finally left. Overall it was a great show I learned a lot about how deer move as a pack and look out for danger although we never did see an elk. Once it became too dark to see we packed it up and hiked back to the truck.

through all that was going on.  That lesson was not enough for me to be confident diving into the next one but I did learn a lot.

Back at the cabin it was warming up but was still about 35 degrees.  We dropped off the bull and still had another hour of daylight so we got back in the truck and went looking for Mike’s cow.  We Set up in the tree line of a common path and waited, Mike had the rifle on the shooting sticks and I was sitting on a rock staying low glassing the field.   Two bucks and a doe walked into sight and continued on their path, this made me feel better as I was again worried about the wind and if they could smell us.  About 30 minutes in Bean whispers to me “Tom, don’t move” I had my binoculars in my hand so I continued to scan the area looking to see what he was seeing, but got nothing.  I looked back at Mike and Bean and they were now looking behind us.  I slowly turned spinning on the rock and could see two elk spikes coming up behind us, heads in the air like they knew something was up, but didn’t know what. They continued to approach, they walked up and around to the west as if they were stalking us.  As they came closer a third elk appeared, then a fourth, with similar antlers and followed the same path as the others, way west and out of our path. They were not what we were looking for, but that was a great experience to watch them walk up on us. As the sun set we packed up and walked back to the truck for the night.

Mike would get his cow the next morning and then we headed back down to have them processed before making the drive back to San Diego.  Everyone got what they came for and we all stayed healthy regardless of the virus insanity.