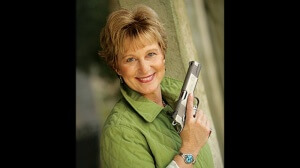 Sandy Froman became a gun rights activist following an incident in which a burglar unsuccessfully attempted to break into her home. In 2005, Froman was elected NRA President after serving as a Board Member and Vice President for a number of years. She stated that her two goals as NRA president were to promote concealed carry of firearms in public and “to work to get good judges appointed.”

Ms. Froman was raised in the San Francisco, California Bay Area, earned a Bachelor of Arts degree in economics with distinction from Stanford University in 1971 and a Juris Doctor degree from Harvard Law School in 1974. She has been a practicing attorney since that time, has been a partner in three separate law firms and also taught at law school. Froman serves on the boards of the University of Arizona’s law school, as well as George Mason University School of Law. She is currently a member of the NRA Board of Directors, on which she has served since 1992, and the co-chair of the Tim Bee Congressional Exploratory Committee. In 2007, she was unanimously elected to a lifetime appointment on the NRA Executive Council. She is currently a practicing attorney and international speaker. Her contributions also appear on WorldNetDaily.com and Townhall.com. She served as 2nd Vice President of the NRA for five years under Charlton Heston, two years as 1st Vice President, and was elected to the NRA presidency in April 2005.

We have asked her to speak on the following topics:

Turners Outdoorsman El Cajon is donating 2 firearms for this event. They are donating a Beretta and a Kahr Pistol. Each person who attends (MUST RSVP AHEAD OF TIME!), will be entered for a door prize to win one of these guns. The other will be available as a raffle prize at the event. Seating is limited to 60 people, so reserve your seat today!

RSVP is Required, Thank You!

Reposted from @official_sci Happy 4th of July from